The taste of sheep milk

Are you thinking, thanks, but no thanks? We can tell you, you’ll probably be thanking us once you have tried the taste of sheep milk and sheep milk products. For many, the idea of drinking milk from a sheep seems odd, but people have been doing it for thousands of years.

Don’t think of the earthy gamey flavour of goat milk, while they may belong to the same sub-family there is a lot of difference in flavour. Sheep milk has a very subtle almost sweet flavour with no fatty residue. It has a silky texture and when it comes to the cheese, it is a much less dense product than bovine dairy but is surprisingly creamier.

It seems like an oxymoron. Fattier milk without the fatty residue; comes from a similar sub-family as a goat but without the gamey flavour; sweet? The difference between sheep milk, goat milk and cow milk is essentially fat and protein content.

There is about twice the amount of butterfat in sheep milk when compared to cow and goat milk. This means sheep milk has the most solids and not so much milk is required to make cheese. It also makes for a richer creamier cheese due to the small size and low density of the fat globules.

Find out more about the health benefits of sheep milk here.

All this talk of fat may have you worried about your health, but the fats and their structure in sheep milk are beneficial fats. The levels of oleic acid found in sheep milk help to decrease the levels of ‘bad’ LDL cholesterol, while its high levels of conjugated linoleic acid support the positive effects of antioxidants and immuneoregulators which is beneficial in combating the effects of obesity, some cancers and diabetes. Sheep milk is rich in monounsaturated and polyunsaturated fatty acids which help in the reduction of heart disease.

So, what does it look like in a latte?

For a start sheep milk has a naturally sweeter taste than that of cow or goat milk. This means that even sugar lovers either stop putting sugar in their lattes made with sheep milk or greatly reduce the amount of sugar they generally need. Due to the high fat and protein content of sheep milk your latte ends with a creamy, long-lasting foam with a great subtle flavour.

… and if coffee is not your thing, then just pour yourself a glass of rich creamy sheep milk.

If you are interested to learn more about sheep milking head to sheepmilk.co.nz 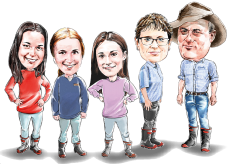